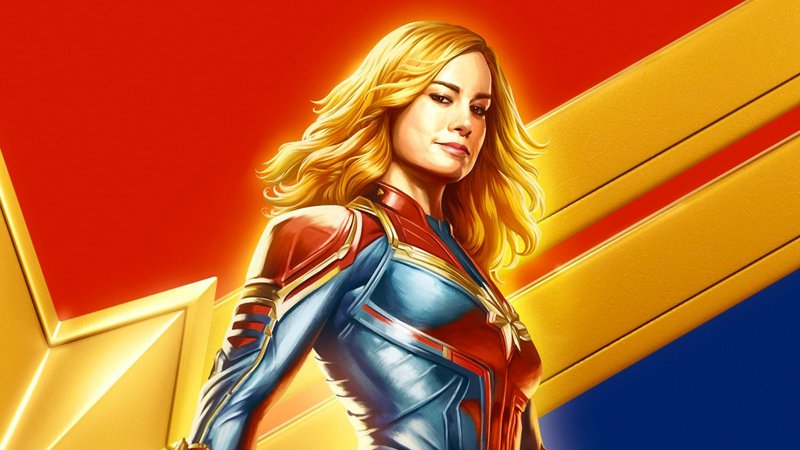 A less-than-super hero story that feels more like a missed opportunity than a triumph.

The Marvel Cinematic Universe (MCU) needs little introduction. Since debuting with Iron Man in 2008, Marvel Studios has cranked out 21 superhero movies and is now the highest grossing movie series in cinematic history. Captain Marvel is the latest entry in the expansive comic-book narrative and the first to feature a female hero as the lead. The sci-fi/action film features high set-piece action, intergalactic travel, shape-shifters, and even a de-aged Samuel L. Jackson.

There are 6-7 minor profanities (words that start with A, B, and S, but not F). There are a few moments of crude humor although nothing too offensive or concerning for young viewers. There are plenty of scenes of action and relatively bloodless violence.

For better or worse, feminism was always going to be a central part of the discussion about the film. During the press tour, leading lady, Brie Larson, declared that she and Marvel had teamed up to “make a big feminist movie.” Then, during the climatic final action scene, Captain Marvel pummels the bad guys to the not-so-subtle soundtrack of No Doubt’s “I’m Just a Girl.” Captain Marvel is a feminist movie by-design. This is not necessarily a problem. That it took 21 movies for a woman to lead a Marvel film indicates that the discussion is timely and much needed. What is somewhat more questionable, however, is how that message and agenda are carried out.

At one point in the film, Carol Danvers (Larson’s character) recruits her best friend—a single mom—to come on a dangerous mission. The friend initially refuses, not wanting to leave her young daughter, until that daughter insists that her mother must go with the clincher line: “I think you should consider what kind of example you should set for your daughter.” The question is an important one for the viewer to ask as well.

This is not to suggest that a woman cannot join in combat or make sacrifices for the greater good. They can and should. The problem is that the films sets up a contrast between the carefree and reckless Danvers and her maternal and responsible friend, and then implies that true heroism and female empowerment comes from the former. 2017’s Wonder Woman was so successful at displaying how Diana (Wonder Woman) found her power and strength by embracing her unique identity as a woman. Captain Marvel almost goes out of its way to show the opposite. Whereas Wonder Woman exemplified the power of traditional woman virtues, Captain Marvel epitomizes a more progressive and modern woman. She’s no nonsense and clearly not dependent on any man (made evident in a humorous scene). She is not strong because she is a woman. Rather, she is a strong character who also just so happens to be female. Yet, in my opinion, by emphasizing how she is just like and essentially interchangeable with Iron Man, Thor, Captain America, and any of the other male heroes, the film actually diminishes the unique power and beauty of her femininity rather than celebrates it.

Any discussion on feminism is a minefield and it’s not my place to dictate how you should navigate it. My point is simply that we should recognize that the film does take a clear stance on the topic. This is certainly not a “big scary feminist” movie that will make woman burst from the theater protesting “down with men!”, but it does present a more progressive and less traditional ideal of what it means to be a powerful female.

There’s a precarious tightrope that all superhero movies walk. They must inspire ordinary people to strive for heroism with characters who are, themselves, far from ordinary (I might be as courageous and brave as Captain America if I, too, was injected with super serum that gave me instant abs, handsome looks, and a near-indestructible body!). Captain Marvel walks this tightrope less successfully than the other Avengers. Her character is so super-charged that there is little room for growth. She begins the film as a nearly flawless hero and ends the film by learning that she can, in fact, be even more super.

In every action scene she is wise-cracking and gleefully laughing as she toys with the villains. Real danger is nonexistent as every obstacle thrown her way is conquered with complete ease and a fierce snarl. Even the few character flaws introduced at the beginning of the film are revealed in the end to be strengths that she should lean into rather than overcome.

If you simply want to be entertained by a super-powered woman beating up bad guys, then character growth might be irrelevant. However, for others—especially those with a young daughter—Captain Marvel is not the inspiring role model that she might have otherwise been. This is a film that entertains viewers by showing them what an extraordinary person can accomplish but does little to inspire them to be extraordinary themselves. Strength, according to Captain Marvel, is purely physical and thus true strength is reserved for only the extraordinary among us.

At this point, Marvel Studios is a well-oiled machine that can crank out decent blockbusters on demand. There is plenty of entertainment value to be had with Captain Marvel and nothing in it is blatantly offensive or off-putting to keep Christians from watching it. In many ways, the film is an encapsulation of today’s American culture and the on-going discussion regarding feminism and traditional gender roles. These are timely and important discussions and I hope that more female-led superhero and action films will continue to explore and shed light on the subject. Unfortunately for Captain Marvel, this responsibility proved a little too big. In the end, if Wonder Woman was an Olympic leap forward, then this film feels more like a slight stumble backwards.

We’d love to hear what you thought. Do you agree or disagree with our observations? Jump into the comments section and let us know!