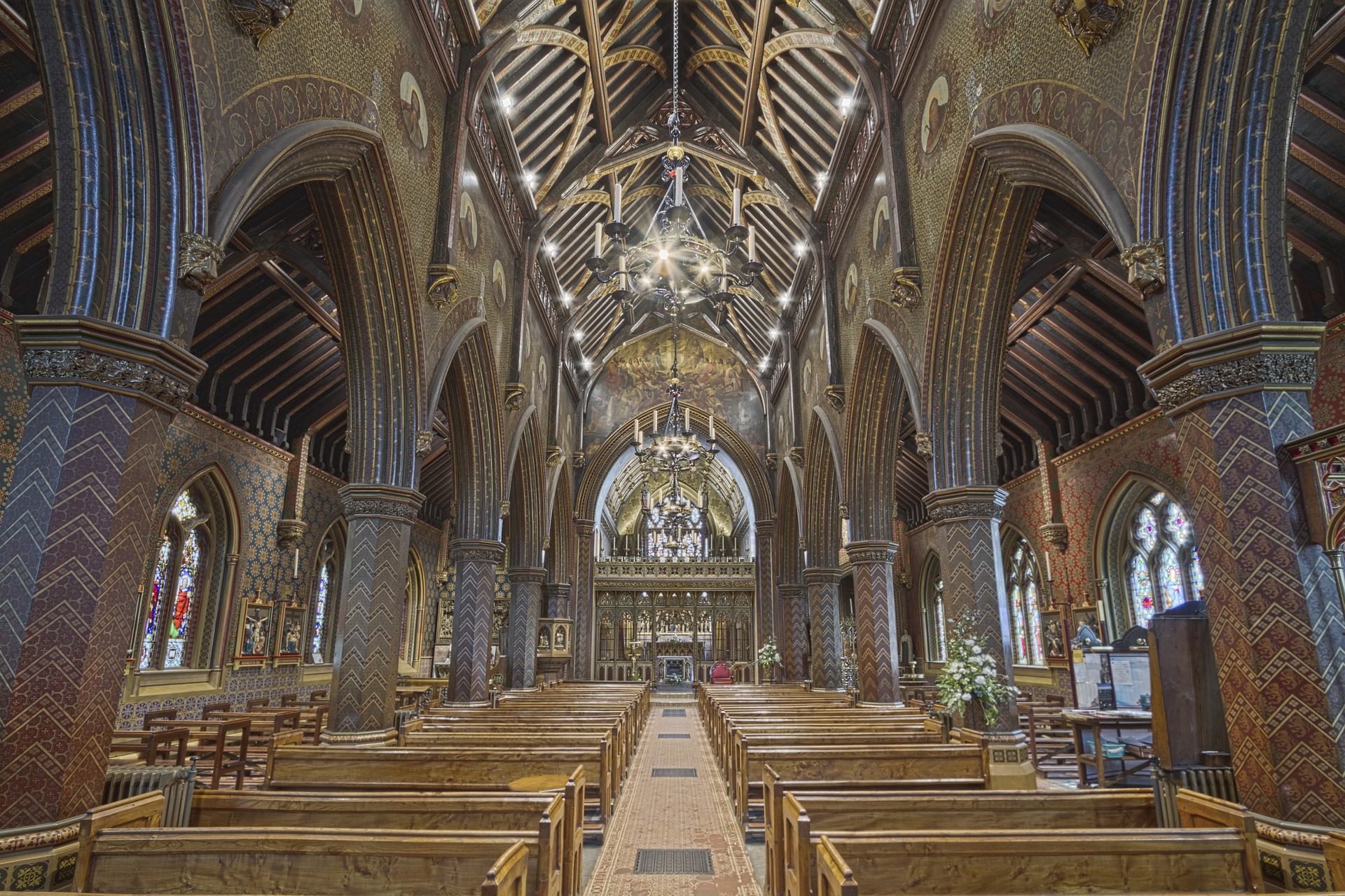 The answer may not be as simple as we assume. Consider these two paintings: one depicts God’s beautiful creation; the other portrays Jesus as grotesque and inhuman.

Which is the better artwork? Which one most glorifies God? Does our answer change when we discover that the frightening, surrealist portrait of Jesus is the handiwork of a gentle 80-year-old woman who, out of good will, attempted to restore a deteriorating painting in her church? (You can see the “restoration” process below).

What about when we discover that the artist of the serene landscape painting was a young, aspiring German who became better known for his non-artistic deeds: Adolf Hitler.

Most Christians would likely conclude that God receives more glory from a creative act born from a sincere and worshipful heart, despite its dreadful quality, than He does from artwork birthed from a vile and evil heart, even when it exhibits superior craftsmanship. We have probably all heard that “God looks at the heart.” This sentiment is evident in the story of the poor widow who gave only two copper coins but whom Jesus esteemed above those who gave significantly more (Mark 12).

Many Christians affirm with their lips that God cares only about the condition of the heart, but their actions often suggest that outward appearance, beauty, and competency do matter. For example, they sing “Come Just As You Are” during worship services on Sundays after spending more time on their outward appearance that morning than any other day that week.

We proclaim that God judges and accepts our worship solely based on our heart’s condition. But if we truly believed that statement, the musicians on praise bands would be better off locking away their instruments and committing every moment of practice to meditative prayer and fasting. Why waste time mastering key changes, chord progressions, and song transitions? By the same token, the congregation is collectively relieved when the soloist is a competent singer rather than a godly, but utterly tone-deaf prayer warrior.

God cares about our hearts and our inner beauty, but He is not indifferent to outer beauty and expert craftsmanship.

The Tabernacle, Ark, and Temple—the three Old Testament structures that served as God’s symbolic dwelling place—were all designed by God Himself.

For example, God commanded Moses, “Then have them make a sanctuary for Me, and I will dwell among them. Make the tabernacle and all its furnishing exactly like the pattern I will show you” (Exodus 25:8-9). The Bible then provides four entire chapters worth of detailed blueprints. God clarifies that the work must be “skillfully done” by “a skilled craftsman” (not merely a well-meaning and sincere believer) at least six times.

Later, when King David passes the blueprints for the Temple to his son Solomon, the author notes, “He gave him the plans of all that the Spirit had put in his mind” (1 Chronicles 1:12). Then, immediately after pondering how to construct the Temple in a manner worthy of God’s grandeur and instructions, Solomon sends a message to the King of Tyre asking for skilled workers. In order to achieve the level of outward excellence God prescribed, the Temple was built, in part, by pagans (from a city where the prophet Ezekiel would eventually pronounce God’s judgment and destruction).

Why did God care so much? Why did He not simply allow the most faithful and sincere Israelites to “do their best” and utilize their own designs? Why does Scripture contain chapter after boring chapter of these detailed instructions? The Bible offers some hints.

The author of Hebrews describes the Tabernacle’s design as “a copy and shadow of what is in heaven” (8:5). In a mysterious way, the outward appearance reflected the glory of heaven, and God was not willing to leave such an important representation to chance. And before we ascribe symbolic or metaphorical functions to the design, the Bible also notes that several of the divinely given features were included specifically “for beauty” (2 Chronicles 3:6). God cared that the physical constructions were worthy of the spiritual reality they represented, and outward beauty was an important component.

Giving More Than Our Current Best

Is God glorified when a sincere Christian makes bad art? Yes and no.

Worship is not off limits to tone-deaf or rhythmically challenged Christians. At the same time, God cares deeply about excellence and outward beauty. That God looks at the inner condition of our heart is not an excuse to neglect striving for outer excellence as well. We please God when we offer Him our best. And if we remain perpetually at the same skill level, we are not truly giving our best. A mother does not hang her son’s scribbled doodles on the fridge when he is 16, regardless of how much she loves him. “Doing our best” does not merely require that we utilize our current abilities; it demands that we expand and increase those abilities.

We should support and celebrate the art Christians make, but we shouldn’t give it a “free pass” simply because it was well-intentioned. God may look at our hearts, but our art is a reflection and representation of Him. As Christians, let us make sure that, like Solomon’s majestic Temple, it is an image worthy of the one it represents.