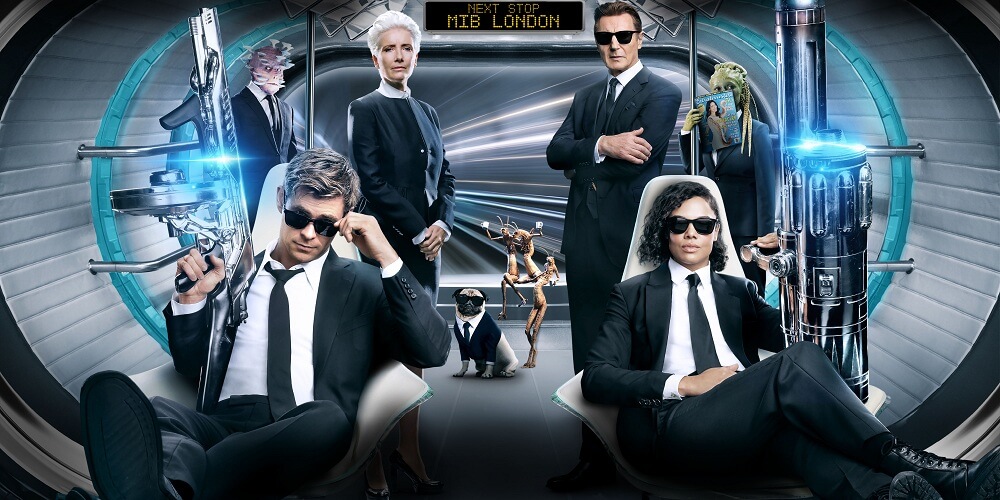 I felt no excitement going in to review this film. As the lights dimmed, a captivating voiceover began narrating about distant and imaginative worlds other than our own and stunning imagery unfolded on the screen. To my great surprise, I was instantly enthralled, my earlier trepidation turned to genuine curiosity and, dare I say, excitement. That is, until the IMAX logo appeared and I realized that I was still watching an ad. When the movie eventually did start, nothing in the 2-hour runtime came close to matching the thrill of that IMAX ad—and that should tell you just about all you need to know about this film.

On paper, this film had at least some potential. In particular, Chris Hemsworth and Tessa Thompson are both excellent and charismatic actors and demonstrated great chemistry in their two previous collaborations (Thor: Ragnarök and Avengers: Endgame). They are equally as capable and charming in MiB (although Hemsworth’s slapstick brand of humor that worked so successfully with Thor comes across as silly and cartoonish when playing a fully human character rather than a fish-out-of-water god). The problems with this film are . . . well, just about everything else. The story is dull, the visuals are bland and uninventive, the humor falls mostly flat, the villains are silly and forgettable, the script is incoherent and convoluted, and a distracted young child will still likely predict every plot twist within the first 10 minutes of the film. In other words, this movie is a mess—and not even a very enjoyable one.

Profanity: For once a PG13 movie did not utilize its one allowable F-bomb. Unfortunately, it compensated for this with plenty of minor profanities (mostly starting with S—).

Sexuality: While there are no explicit sex scenes, sexual innuendo is frequent throughout. One character wakes up in bed with an squid-like alien (with suction marks on his chest) after an implied sexual encounter. Later, a female character is “pimped” out to a male alien who suggestively thrusts his hips toward her. There are several comments that “love is love” in reference to human/alien sex (although this is played in a humorous way).

Violence: There are two scenes in which characters are killed and turned into goo that are fairly graphic and might be disturbing for younger viewers.

The motif of fate and determinism are woven throughout the film. At one point in the film, Liam Neeson’s character (High T) remarks “Always remember, the universe has a way of leading you to where you’re supposed to be at the moment you’re supposed to be there.” The theme of destiny or fate is, of course, a frequent trope in fantasy/sci-fi storytelling. As humans, we are continually drawn to the idea of overarching purpose and meaning. We want to believe that our lives are not random or accidental but are pieces that perfectly fit into a larger and cohesive puzzle. If that puzzle is a worldview, then it is certainly not the Darwinian or evolutionary one that atheist Richard Dawkins famously described as having, “No design, no purpose, not evil, no good, nothing but pitiless indifference.” It is interesting that while modern culture has largely scorned religion’s child-like hope for meaning and purpose, this same yearning continues to dominate much of our storytelling.

In Alfred Hitchcock’s classic 1960 horror film, Psycho, the villainous Norman Bates exhumes his deceased mother’s corpse and for the next decade acts as though the mummified body is still alive. Men in Black: International is the corpse of Norma Bates. The Men in Black franchise has been dead since 1997. Now three films removed from the enjoyable original film, there are no signs of life to be found. I have reviewed several bad films this year; yet, I cannot recall another recent film that was so utterly devoid of inspiration or vision. Last week’s lackluster X-Men: Dark Phoenix attempted to explore some fresh ideas but was ultimately undone by awful execution. In contrast, MiB: International is executed and crafted just fine, but lacks anything even remotely resembling an interesting idea or innovative approach. If anyone wants to argue that Hollywood is out of good ideas, they need look no further than Men in Black: International to support their case.

Recommendation: Don’t touch this film with a 39½ foot pole. If anything, wait until it comes to your streaming service—and then leave it there while you go outside for a walk, or read a book, or finish folding the laundry.