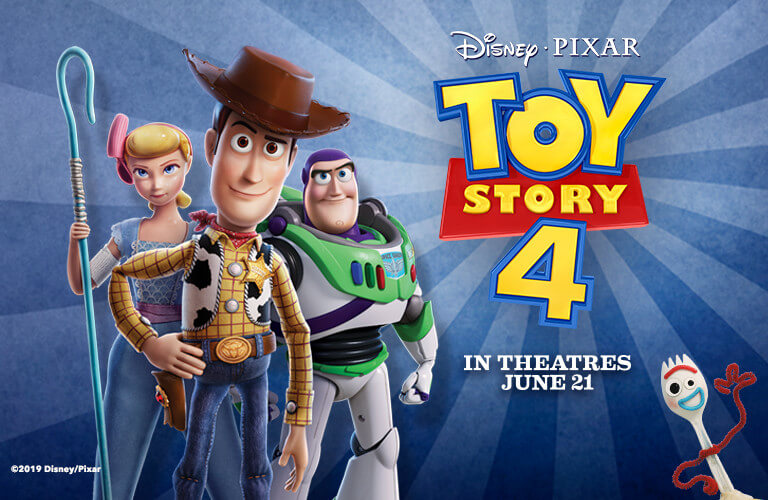 Animated films have long followed the same standard formula of making the movie for kids and then tossing in enough adult jokes, references, or innuendos for the sake of the long-suffering parents. The Pixar films flip this formula. They make films for adults and then add enough cute side-characters to sell lots of toys charm and entertain children. This makes Pixar films difficult to review. Toy Story 4 is a good movie…but I’m not sure it is a very good children’s movie.

Toy Story 4 is loaded with soul-probing and emotional themes, but surprisingly short on silliness and laughs. The movie is essentially a standard drama in which the characters just so happen to be animated toys. The new character standout was clearly intended to be Forky—a spork turned kindergarten craft turned toy. However, I watched the film with my two four-year-old boys and neither even mentioned Forky afterwards. The other newcomers—Ducky (Keegan-Michael Key), Bunny (Jordan Peele), and Duke Caboom (Keanu Reeves)—get some laughs, but they do not have nearly enough screen time to make a lasting impression. Even mainstay Buzz Lightyear is mostly reduced to a limited supporting role this time around. Instead, the vast majority of the story is given to Woody and Bo Peep. While this allows for some touching and heartfelt moments, neither of the characters are as entertaining or fun as their quirky surrounding cast.

Profanity: None. The worst word used is one usage of ‘idiot.’

Toy Story 4 is primarily about finding your identity. To a degree, this has been the central theme of every Toy Story film. Who Woody if he’s not Andy’s favorite toy anymore? (Toy Story). Who is Woody when he has to choose between his found family and his real family? (Toy Story 2). Who is Woody when his kid grows up and his toys become obsolete? (Toy Story 3). Now, four films in, Woody must forge a new identity and accept that perhaps his days of bringing joy to just a single child are behind him.

The theme of identity has been with the movies since the 90s, so to draw a straight line between it and today’s cultural climate is obviously a stretch. Yet, while the theme may not have been directly inspired by today’s concerns, it certainly speaks to them. To its credit, the film succeeds at demonstrating that not all toys should follow a single purpose. While Bo Peep embraces a free-spirited life as an independent woman, another doll finds her purpose having tea parties with her kid. While Woody struggles to find purpose in his previous identity, the others in this familiar gang do not. In other words, the film emphasizes the need to find your identity without falling into the frequent trap of pushing any one identity.

2. Growing Up and Leaving the Past Behind

In some ways, the film’s other important theme of growing up and aging are a commentary on the movie itself. I was 8 years old when I saw the original Toy Story in theaters. Now I’m watching a new Toy Story adventure 24 years later. The Toy Story films have aged along with the franchise by becoming increasingly mature and adult-oriented in its themes. The initial film was powered by the simple joyous idea that toys might come to life when we aren’t looking (a thought all children entertain at some point). The original film’s plot dealt with the petty jealousy between Woody and Buzz; providing an instantly relatable moral for children.

Toy Story 4 seems to have been made primarily for those who were kids in 1995 when the original was released but who are now adults. The plot of a protagonist having an existential crisis as he struggles to transition gracefully onto the next stage of life and discover his newfound identity might connect with adults on an emotional level, but is as about as relatable to kids as a film about workplace pressures or marital strife. The film deals primarily with issues that most of its viewers won’t experience in their own life for another few decades. The tension between adult-oriented themes and its children-oriented package make for a confusing viewing experience.

Pixar Studios is to the animated world what the MCU is to summer blockbusters. They have a clear storytelling philosophy and they execute their formula with precision nearly every time. They are the undisputed kings at elevating animated movies into deep and emotional experiences. Sadly, along the way they seem to have forgotten to also make them fun. Toy Story 4 is not a bad movie. I suspect that most reviewers will heap well-earned praises on it. But these reviews are written by 30-50-year-olds, not 6-year-olds. I commend Pixar for acknowledging that kids can handle far more than poop jokes and endless gags, but when a movie series about children’s toys loses all sense of child-like wonder, I question whether they’ve strayed a step too far.

Recommendation: If you or your children have enjoyed any of the other Pixar films, then you will likely enjoy this one as well. Just don’t go in expecting a ton of laugher or zany hijinks.