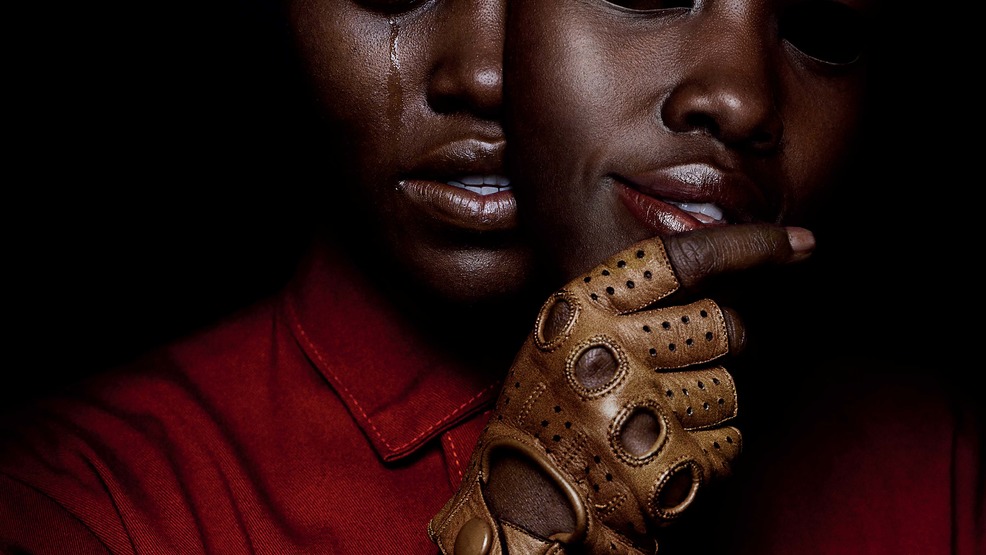 “It is a peculiar sensation, this double-consciousness, this sense of always looking at one’s self through the eyes of others, of measuring one’s soul by the tape of the world that looks on in amused contempt and pity. “

While there were plenty of disturbing reactions to Get Out, the most disorienting revelation was that it originated from the mind of Jordan Peele.  Not even The Simpsons could have predicted what darkness lurked within the other half of Key and Peele!  With Get Out, Peele proved adroit at alchemizing social anxiety about race into a chair-squirming thriller.  Peele exchanged his considerable social currency to make Us.

In the film, Adelaide (Lupita Nyong’o) is distressed about her family’s vacation.  Her inner fears are confirmed when a group of doppelgängers armed with scissors and dressed in red jumpsuits interrupt their getaway.  If Get Out reflected racial distrust, Us mirrors murky inner conflict between our best and worse self.

In Us, Adelaide faces her worse half, Red (also played by Lupita Nyong’o).  A soul divided, they collide over a shared desire to live in the light.

The film’s conflict, despite the fictional presentation, reflects an all-too-real reality. Living out a Christian existence on Earth is like walking through a house of mirrors:  Each mirror reflects sin-distorted wants.  These disobedient duplicates mimic your smile, share your clothes, and move like you.  Despite this clear exaggeration, a question bolts into consciousness:  Is this me?

Adelaide believed that banishing her darker half to the sunken place would make her whole.  Adelaide believed that her worse tendencies were forever gone.  However, banishing and vanishing is not the same.  Our sin-stained negative image still quakes within even after salvation.  Getting cut off in traffic turns us from mild-mannered motorists into Punisher-style vigilantes.  Turning cheeks bruises flesh, blotches emotions and blemishes spirits. Blasphemy and blessing flow from the same mouth.  Sunday’s spiritual high gives way to Monday’s monotonous low.

Even when the other escapes confinement and muddles our reflection, Christians must remember we are tethered to the image of God.  Hebrews 4:12-15 states:

“For the word of God is full of living power.  It is sharper than the sharpest knife, cutting deep into our innermost thoughts and desires.  It exposes us for what we really are.  Nothing in all creation can hide from him.  Everything is naked and exposed before his eyes.  This is the God to whom we must explain all that we have done.  That is why we have a great High Priest who has gone to heaven.  Jesus the Son of God.  Let us cling to him and never stop trusting him.  This High Priest of ours understands our weaknesses, for he faced all of the same temptations we do, yet he did not sin.”

By acknowledging our other, we’re able to move forward with God instead of stumbling while looking back over our shoulders. Double consciousness; a soul divided; splintered pieces of self on earth and eternity.  Sometimes the reflection becomes muddled, but, at the end, His true image will shine and divide the other from us.