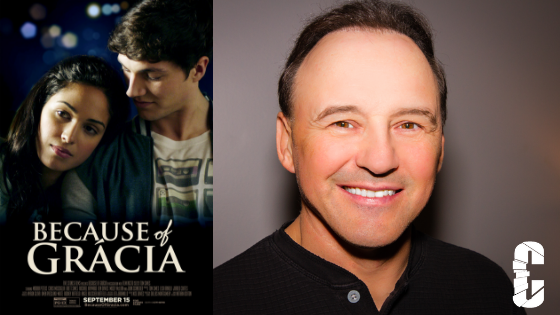 I enjoy talking about art, but I love talking to artists. I recently had the opportunity to speak with director Tom Simes and his wife, Michelle, about their latest feature film, Because of Grácia. Our 2+ hour conversation also touched on the difficulties today’s youth are facing and the amazing power of film to impact the culture for Christ.

In an ironic reversal of the “starving artist” stereotype, Simes turned to art to support his day job financially, not the other way around. Just three weeks into a new position with a pro-life school program, Simes was informed that there was only enough money to pay his salary for the next three months. So, he wrote a play and made some corresponding T-shirts. Both were a hit. He wrote a longer play and sold more T-shirts. This endeavor led him to spend a decade traveling across Western Canada to perform the plays in schools. The experience naturally evolved from writing plays into a desire to make films.

He had never worked with a professional camera. In fact, during the making of his first film—a sports documentary about Canadian football—he was still consulting the instruction manual while on set! Despite spending most of his career as a high school teacher, he is a diligent student. He quickly learned the craft. When God later stirred his heart to make a feature film, he spent a full year studying the genre and watching more than 50 faith-based films.

Something that quickly becomes evident when talking to Tom Simes is his passion for film, not just as an evangelistic tool but as an artform. During our conversation, he regularly sprinkled in quotes by directors like Steven Spielberg and referenced films like Shawshank Redemption. Film is not a tool he hijacked for an evangelistic agenda; rather, storytelling is at the core of who he is.  Thus, in the middle of teaching at “a very progressive school,” Simes used his experiences as inspiration for a script, and that secular school became the location where he completed the first cut of his most recent feature film, Because of Grácia.

About Because of Grácia

Because of Grácia is a faith-based drama/comedy that focuses on major issues high schoolers face today. Simes expressed that he did not have a list of themes he wanted to address through the film. Instead, he wanted to explore what Chase—one of the story’s teenage protagonists—would naturally experience. The film casts a wide net, touching on issues like creationism/evolution, free speech, and abortion. These various threads are unified through the characters’ experiences, rather than the characters serving as mere tools to prop up the film’s message. As Simes hammered home repeatedly in our conversation, “Story must always come first.”

For the film, Simes drew inspiration from his own extensive experience teaching in a secular school. He recalled, “I noticed that the Christian kids seemed to go underground. They were really quiet in my classes. They’d kind of walk the side of the hallways with heads down, and they didn’t have any confidence in who they were in Christ.” The film follows three central characters—Chase, Grácia, and Bobbi—as they search for their confidence and identity in Christ, each in his or her own personal and unique way. With so many recent movies and TV shows depicting the dark, sexualized, and angsty side of high school (13 Reasons Why, Euphoria, Booksmart), Simes’ film offers an optimistic and hopeful perspective. The film does not ignore the real issues teenagers face, but it showcases that Hollywood’s answer is not the only option.

About The Power of Film

Simes is well aware of the statistics that as many as 7 out of 10 church kids abandon the church after high school. One reason for this trend is that teenagers “have these competing narratives in their lives that are really strong.” The good news, according to Simes, is that “authentic stories of faith told through the arts can really impact people’s lives.” The bad news, however, is that “there is a drip-drip effect from Hollywood and mainstream media that is giving them very consistent messages that are, in many ways, anti-Christian.” Simes observes, “We have this battle happening,” and he laments that too often kids are getting a narrative that is slanted to reflect just one worldview. In Because of Grácia, Simes purposed to give a voice to the other side.

On the one hand, Because of Grácia is unmistakably clear in its viewpoint, and no viewer is likely to be left wondering what Simes’ personal beliefs on the issues are. On the other hand, this film shows more restraint than many other faith-based films do. Despite presenting a strong pro-life perspective, the word “abortion” is never used. When Grácia, played by popular Christian singer Moriah Peters, reveals that she is ashamed of sin and mistakes in her past, the film never discloses what those mistakes are, instead allowing the viewer to fill in the gaps. Even the outspoken atheist teacher, a role often reduced to a cartoonish caricature in faith-based films, is given some heroic moments and ends the film somewhat spiritually ambiguous, rather than with a force-fed conversion.

About Having a Cultural Impact

Simes is a firm believer that a good story transcends age demographics. At the same time, he feels a need to engage today’s younger generations. He mentioned that when he goes to the theater to see a faith-based film, the audience is often comprised of mostly white-haired people with no young people to be found: “There’s a void I want to fill by making films for young people.”

Near the end of our conversation, I played the devil’s advocate and poised several difficult questions: Considering how much money it takes to make a movie, is it really worth the cost? Shouldn’t the church have other priorities? Aren’t there more practical ways to use that money?

After a moment of thought, he responded, “Kids really respect the arts and really respect films. They will actually sit down in a darkened room for an hour and a half and be captivated by what you have to say to them.”

As a result of this unique doorway into young adults’ lives, Simes shared, “We’ve seen changed lives all over the place.”

Throughout the conversation, both Tom and Michelle off-handedly referred to “Grácia babies.” When I asked what they meant, they explained that several young mothers had written them to share that, as a result of seeing the film, they had decided not to have an abortion. A film costs money to make, but how much value is there in saving the life of an unborn baby? When put this way, we can all agree with Simes: “It’s priceless.”

Films are not the only avenue through which to impact the younger generations, but they are a unique and important one. A movie has the ability to connect with and challenge viewers in ways that a sermon or bible study do not. Christians should not neglect traditional church services, but neither can they afford to neglect the immense cultural impact of Christian creatives like Tom and Michelle Simes. Indeed, in the case of Because of Grácia, the stakes of doing so are literally life and death.

I thoroughly enjoyed my conversation with Tom and Michelle Simes. They are both delightful people with their hearts in the right place. Expect Tom to be one of the first guests when our podcast, The Weekly Collision, launches soon (it is coming, we promise). If you want to support Tom and Michelle in their crucial ministry, I encourage you to check out the links below: