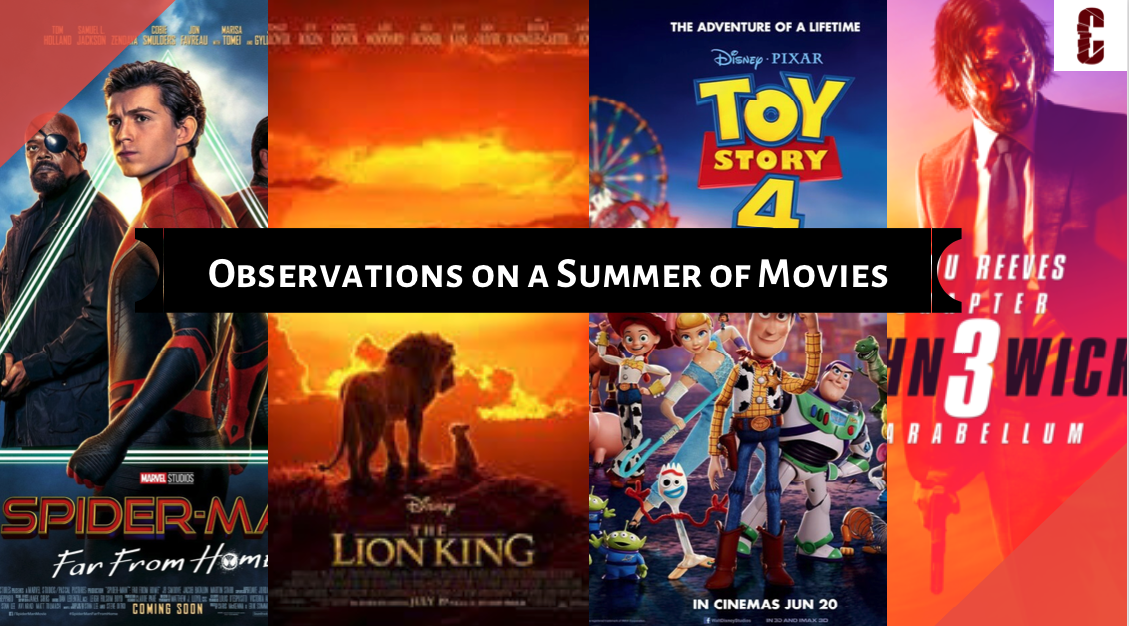 School is back in session. As the sun rises on a new school year, so it sets on the 2019 Summer Movie Season. Ever since Steven Spielberg’s 1975 blockbuster JAWS rocked movie theaters across America, the hot summer months have become the prime landing spot for the big, splashy, spectacle-driven Hollywood fare. 2019 was no different. As Christians called to infiltrate and be present in our culture, it is important to keep our thumb on the pulse of that culture. So, let’s take a few moments to look back and reflect on the summer season that was. To be clear, this post is not intended to be a deep, probing analysis into the subconscious mind of contemporary American culture. What follows are merely some general observations as we take stock on the current state of the movie industry.

It’s For the Kids

Some of these films—particularly Spider-Man—are not limited to children, and many older viewers enjoyed the nostalgia trip of the two Disney remakes. Nevertheless, the kids were in the driver’s seat this summer movie season. This is not entirely unexpected, as the summer months are prime real estate to target kids whose parents are eager to get out of the house. Still, when we think of the influence of Hollywood (for good or ill) our minds usually go straight to the more adult-oriented films, despite the fact that—at least for this summer—the primary audiences being influenced by Hollywood are the kiddos.

Originality (and the Lack Thereof)

Hollywood is officially in a rut. You have to scroll all the way down to #10 to find a truly original film this summer. Lion King and Aladdin are direct remakes of older films, Toy Story 4, John Wick: Chapter 3, and The Secret Life of Pets 2 are (as evident by their titles) direct sequels. Spider-Man: Far From Home is the 23rd entry in the MCU series and Godzilla: King of Monsters is the 3rd entry in the Warner Bros. “MonsterVerse.” The originality of Detective Pikachu is debatable, although it is both an adaptation of a video game (of the same name) and a another of many entries into the juggernaut Pokémon intellectual property. That leaves the controversial Quentin Tarantino film, Once Upon a Time in Hollywood as the first clear-cut original film on the list. Ironically, that film just so happens to be a nostalgic journey back to a day when Hollywood used to make original films. Go figure!

To bemoan the lack of originally in Hollywood has become a banality. There is a plethora of reasons why Hollywood has become driven by endless sequels and massive franchises (most of which begin and end with $$$$). More and more, the more thematically interesting and original cinematic storytelling is being reserved for home streaming (Netflix, Prime, Hulu, etc.). This shift may have a significant influence on the way movies and TV shows influence us and shape culture, as viewing becomes more isolated and divorced from the larger cultural conversation.

Most Fun to Review: Men in Black: International.

Movie We Reviewed That We Wished We Hadn’t: X-Men: Dark Phoenix.

Movie We Didn’t Review That We Wished We Had: Crawl.

What about you? Do you agree with our summer movies awards? What was your favorite movie of the summer?