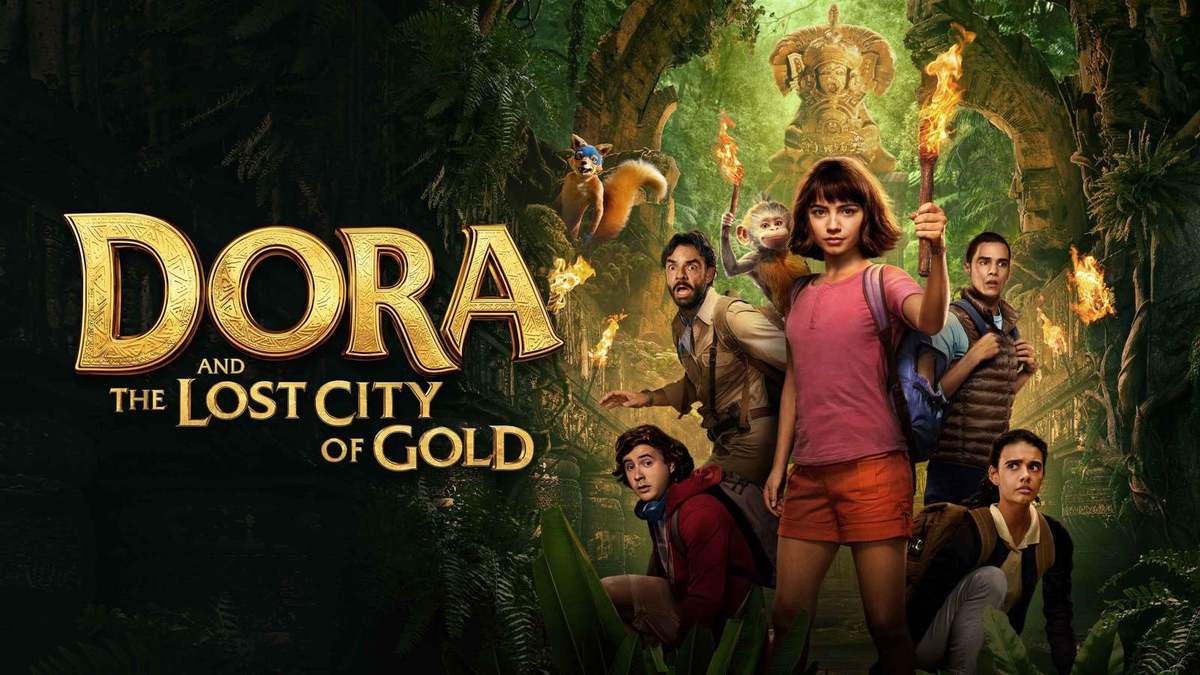 Anyone who has had small children in the last 20 years probably knows who Dora the Explorer is.  For those who don’t have cable or a VCR (I just dated myself), she is a 7-year-old Latina who goes on short adventures. While on these adventures, she solves basic problems using a mix of English and Spanish. The cartoon television show is used as an introduction for children to start speaking Spanish (did you know that in Spanish language countries Dora actually teaches children English instead of Spanish?)

When I first saw the trailer for the live-action movie, I knew that I would take my girls (ages 6 and 8). I assumed that I wouldn’t enjoy it very much myself, but I knew that my kids would. However, one scene in the trailer where Dora looks into the camera and asks for audience participation (like she does in the TV show), got me on board. I realized that the movie was well aware of what it was, where it was coming from, and that it wouldn’t take itself too seriously. I was also curious as to how it would translate from animated to live action, as this hasn’t always gone well in the past (does anyone remember Avatar: The Last Airbender?). I’m happy to report that Dora’s live-action debut is a success, resulting in a fun, family-friendly film.

Profanity: Nothing of note.

Sexuality: There are two minor instances that come to mind.  The first is when teenage Diego and Dora are talking about a classmate. Dora picks up that he has feelings for this girl and says that it is natural for the event they just went through to speed up the “mating” process, to which he replies to never reference “mating” again. The second instance is during one of the challenges when the characters trigger a field of flowers that release spores into the air and cause them to hallucinate themselves into their cartoon counterparts. This leads the adult to strip down and flee into the forest, although some strategically placed flowers block from view anything that you wouldn’t see at a swimming pool.

With a majority of the cast being Latin American, I was very excited to take my girls to this movie. The actress who plays Dora is of Peruvian descent. As I watched the movie it became more apparent how much Peruvian influence is a part of the movie. Being a native of Peru myself, I was super excited to hear them reference the Incan culture and even speak Quechua, which is the language native to the people.  Being able to use this movie to share some Peruvian-specific information with my kids was great. The closest movie experience we’ve had to this was when Pixar’s Coco released.

2. Being Unashamed of Being Yourself.

Dora was homeschooled (in a jungle, by her professor parents, but homeschooled nonetheless). When she moves to the city to live with her cousin Diego, there are some adjustments for her. She has to learn to deal with metal detectors, bullies, and awkward social situations. Despite this, Dora keeps believing the best in people and refuses to let herself to be pressured into being a “normal” girl.  As a former—okay, current—weird kid, I have always encouraged my kids to embrace the weird. If they want to like and be passionate about something, go for it. This movie helped communicate that message.

I’ll admit, I went into the movie with low expectations but was pleasantly surprised. There are moments with subtitles when the characters speak Spanish and Quechua which is nice. The end credit song, “Soy Yo” (which my girls and I have enjoyed for years) was a nice addition as well. The problem-solving aspect of the movie follows the TV show pretty easily without losing the interest of the attending adult. Overall, this movie was an enjoyable and educational experience with my daughters, and one that I would recommend for others.